As Muslims are entering into the holy month of Ramadan, organizations and volunteers working with refugees are adapting accordingly. The NGO Praksis has introduced middle-of-the-night hours for serving food, and Médecins Sans Frontieres has provided its workers with this Ramadan guide: 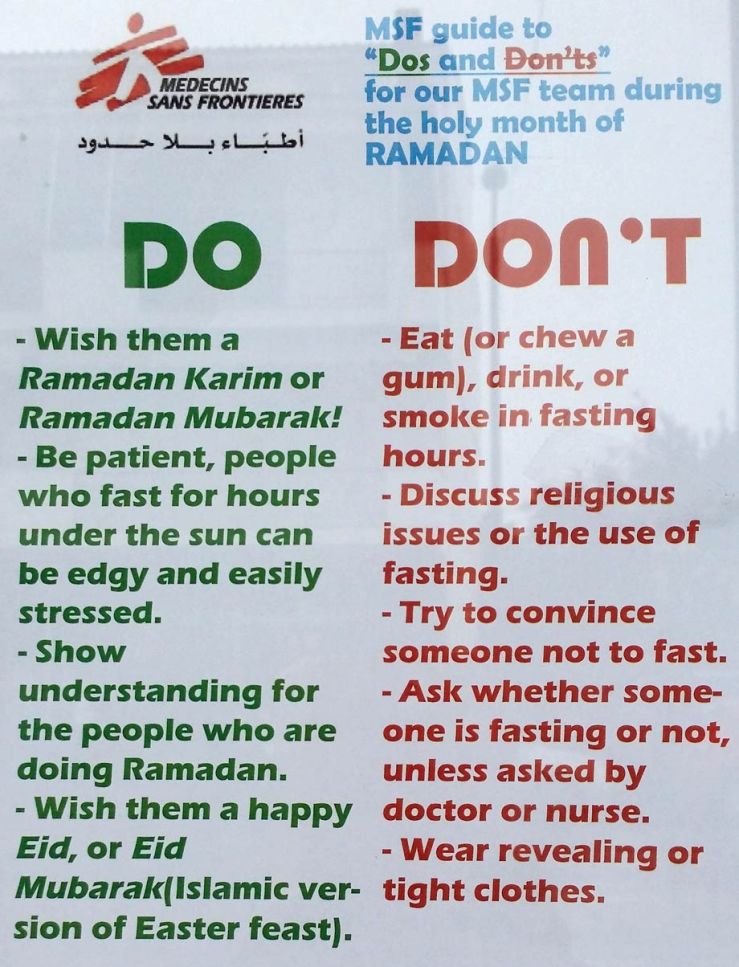 The guide has received some negative press as some writers ask why Western volunteers must adapt to ‘Eastern’ customs, and not vice versa. This is an interesting example of the Assimilation / Integration / Exclusion debate in the refugee crisis. Should refugees retain their own cultural practices or should they adopt the culture of their host society? Can they do both? To what extent should the host society change their own behavior to accommodate cultural differences? In this case, the issue at stake is religion (not culture), and obviously Islam is practiced all over the world already. However, many people still echo Samuel Huntington’s view that the culture of the Muslim world is fundamentally at odds with Western culture.

The assimilation view is that refugees must adopt the culture and customs of the host society. This includes language, foods, attitudes, and potentially religious customs. For example, the groups that are providing sexual education guides to migrants in Germany, Norway, and Belgium are encouraging refugees to assimilate to Western ideas about sex and relationships.

The integration view is somewhat more complex. It indicates a process of mutual exchange, in which refugees will undoubtedly learn the customs and culture of their host society, while also retaining their previous cultural identity as well. Some would even argue that refugees bring something new to add into the mainstream culture. Integrationists would see this as a positive exchange, and mutual understanding is emphasized. The MSF poster above is a nod to this view.

The exclusion view also believes that refugees are bringing some of their culture to the West, but exclusionists take a more pessimistic view of these effects. Underlying this view is the belief that the refugees’ home culture is fundamentally inferior or threatening to Western values.

Another point that should be mentioned is that the refugees’ presence in Europe is likely to be temporary. From the refugee side, the motivation to assimilate or integrate may not be extremely strong, as they do not really see their current host countries as their permanent home. If they expect to eventually return to their countries of origin, it is possible that they will make less of an effort to culturally blend. This particular crisis’s effect on European culture is not permanent, but Europeans are being forced to re-evaluate how they define culture. Some may see this as a natural step of cultural evolution, while others see their culture as they know it being lost.

In our interviews of service providers and volunteers, we are asking whether the interviewees think, like MSF, that it is important for Greeks to have an understanding of the refugees’ home culture. Their answers to this question will be an interesting indication of how people see the cultural aspect of the crisis. In the meantime, Ramadan Mubarak to those who are celebrating.